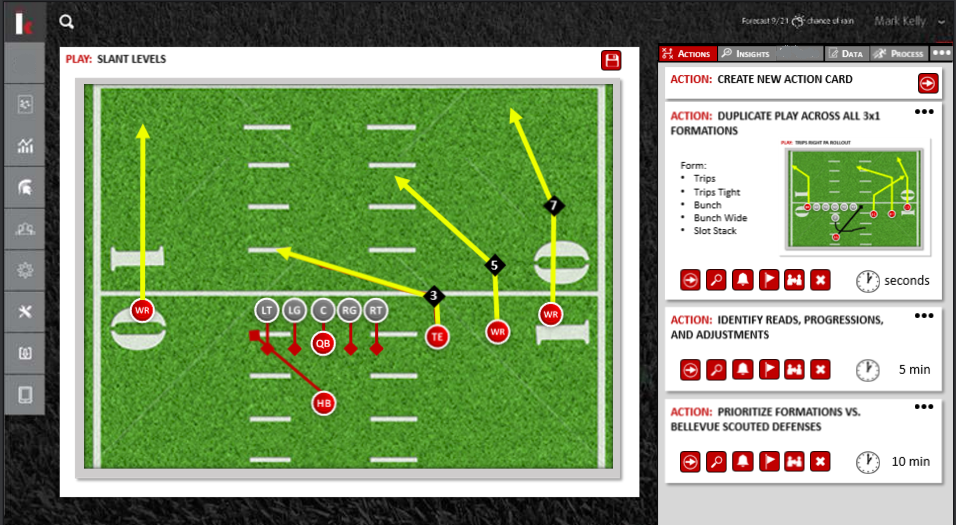 Let’s face it. You can talk until you are blue, or more likely, red, in the face and your players still aren’t retaining half of what you’ve said. For those of you who are educators, the same could be said for most classrooms. These three simple routines will make significant strides with player retention, and therefore, reaction time.

I had a fellow teacher stop by my office the other day complaining that his students aren’t ‘getting’ the material. Then the cliche’ was dropped. “You can lead them to water, but you can’t make them drink”. I’ve got a bit of an issue with this, and there is research to the contrary, but player motivation is a topic for another day. Let’s assume for now that your players are motivated, they just are challenged with remembering all of your plays. Depending on the thickness of your playbook, this could be easily understandable (has your 130 lb freshman DB flipped over backwards under the weight of your playbook in his backpack?).

Okay, so how can you improve the memory of your players?

After giving each direction or instruction, get in the habit of following it up with “For example,…”

You might do this occasionally already. Now we just need to make it a habit. What this phrase does for your player is primes their mind to start connecting, which is the key for retention. For example, you are teaching your young DT what to do immediately after the snap. You want to teach them “Attack, then React”. Let’s say you want them to focus on attacking the opponent’s closest hip. You’d say. “Attack the lineman’s closest hip, then react to what they do. For example, if they pivot into you, you respond with a rip in the opposite direction”.  This seems simplistic, but by making a habit of this, you bring your vast understanding down to their level. Sometimes the more we know, the harder it can be to relate to those who are learning it for the first time. This simple habit helps bridge that divide.

2) Use visuals, video, or playbook excerpts in your message

We’ve all heard the theories of some people being visual learners, right? Well, recent research debunks that myth and suggests that everyone is audio, visual and kinesthetic learners.  Some of the biggest suggestions from this research is that each mode of learning has different effects, and visual learning, when supplemented with audio, or reading, helps with memory retention.  This suggests that you shouldn’t just rely on ‘on-the-field coaching’, or a 20 lbs playbook. Giving your players a visual, dynamic playbook, with written directions and/or audio attached, in supplement to on the field coaching can have a significant impakt on your players’ ability to remember plays and instructions. This is why we’re developing our playbook application for Impakt Coaching. If you haven’t checked it out yet, you need to. Wait til you see what is now possible! 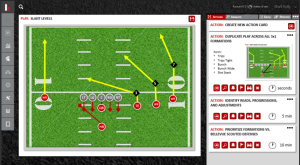 Testing. Yep, bear with me on this one. I’m sure more tests is exactly what your players want to hear. Plus, tests need to be graded, and grading tends to be the bane of most educators’ existence.  So why do it? For one, do it because most programs don’t. And, more importantly, it works. It works incredibly well.

Cutting research presented in the new book Make It Stick (Brown, Roediger III, McDaniel), have found that frequent testing helps retention more than the traditional continually learning about a subject (re-reading, re-listening…). You don’t need to make the tests worth anything. My guess is that if the player is already working hard for you, they don’t want to disappoint. Plus, if you’ve ever head about the Hawthorne effect, you’ll know that people will improve their behavior just because they know that they’re being observed and measured. You don’t need to add a carrot, or stick, to the tests. If you measure it, they’ll manage it.

I know what you are thinking.  Who has time to do more testing/grading?  As an educator and coach, I certainly don’t. That’s why we designed a testing feature into Impakt Coaching. You can easily set up quick and customizable tests/quizzes for players. You can even test yourself and your assistants to improve your play recall ability.  It doesn’t take more time. Our philosophy is to coach smarter, cause you are already coaching harder.

You want your players to stop thinking, stop stinking and start responding quickly on the field. That requires a player to have a solid memory, gained through good examples, visuals and repetitive testing. There are a host of different tools (Google docs, emails, hard copies, playbooks, Hudl video tools, paper/pen…) to help you do this. We’ve also worked hard to have everything you need in one simple program. Let us know if you want to learn more or see a free demo.